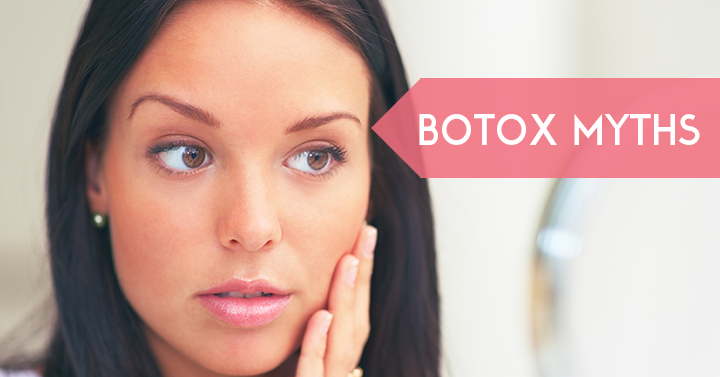 “What if I lose sensation in my face after getting Botox?”

“I’m scared of being injected with poison.”

Do any of these concerns sound familiar? Perhaps these statements sound like thoughts that have been on your mind or sentiments you have heard expressed by friends and family.

Last week we learned why Botox has been such a game changer for dermatology as well as in people’s lives. In this post we’re going to tackle some common myths and misconceptions about Botox so you can make an informed decision about whether or not this much publicized substance is right for you.
There are many myths floating around out there about Botox. What follows are some of the mistaken ideas we’ve heard repeatedly during our years of practicing medicine followed by facts based on our years of extensive research and experience.

(Reminder: As stated in last week’s blog, Botox is simply a brand name for one type of neuromodulator. We use several in our practice and all of them are great. However, Botox is by far the best known, and so for the sake of convenience we simply use the name ‘Botox’ to refer to all neuromodulators.  The information here can equally be applied to all of them.)

Toxins are bad, you say? This is probably one of the biggest myths of all, because the words “botulism” and “toxin” conjure bad images for most people.

Patients have told us they don’t want to have Botox because they fear they’ll be numbed, poisoned; they won’t be able to feel anything or might look like a monster. The list of dreaded Botox consequences goes on.

Let’s set the record straight once and for all.

Botox is the trade name for a purified version of botulinum toxin type A, a nerve impulse blocker produced by bacteria.

Yes, you read that correctly. Bacteria
.
For cosmetic purposes, it is injected in miniscule amounts into specific facial and neck muscles. It binds to the endings of nerves and prevents the release of chemical transmitters that activate the muscles under the skin. In essence, Botox injections temporarily weaken and relax these muscles, reducing the wrinkles that are produced by habitual muscular contractions.

Let’s get back to those scary words. The first thing many people think of when they hear botulism is it paralyzes your diaphragm causing you to stop breathing and die. Yikes!

Now, herein lies the marvel of modern medicine. Surprisingly, medicine takes many of the things in nature that could potentially harm us and turns them into things that help us. Penicillin, for example, is produced from mold. In fact, there are many miracle drugs in dermatology and medicine, in general,, which are produced by bugs, bacteria, mold or fungi. Bacteria often secrete toxins we can use to our medical or cosmetic advantage.

Botulism toxin type A can have a positive effect at the neuro-muscular junction. We have nerves that innervate our muscles and tell our muscles to move. Botox interferes with the release of a neurotransmitter that signals specific muscles to contract, therefore, weakening the condition.  For example, think about the vertical frown lines between the brows.  In some people, the lines are so deep – even at rest – that they look angry or mean.   When Botox is injected specifically into the muscles (the corrugator muscles) that cause us to raise our brow together – voila!  The lines smooth out and disappear.

Why?  Because the effect of Botox works at the neuromuscular junction of that specific muscle – the corrugator muscle.  It has nothing to do with blocking the diaphragm muscle in our chest!  Furthermore, the dose injected into the corrugator muscle is miniscule and negligible compared to the dose it would take to cause “botulism!”

There are many studies showing Botox does this safely and effectively. One important paper was published September 2012 in the Aesthetic Surgery Journal, where a committee of 13 dermatologists, plastic surgeons and facial plastic surgeons reviewed studies on Botox and came up with recommendations. Among their findings: “Aesthetic use of [botulism neurotoxin type A] has a good safety profile. Most adverse events are minor and related to the trauma of injection, although special care is needed in certain anatomic areas.”